Welcome to July! That’s right, the year is half over already. Happy Independence Day to our friends in the USA, and Happy Canada day to all our Canadian friends for last Sunday. Have fun, everybody!

As the previous In-Process hit the press, NVDA 2018.2 dropped. Soon after, a gremlin was found in the system which ate the 2018.2 translation updates for some languages. English speaking users won’t notice any difference between 2018.2 and 2018.2.1. For other languages, it was very important for us to correct the issue. If you haven’t got the latest version, be sure to Download NVDA 2018.2.1 now.

One of the problems happened to be with updating the “What’s New” file. As a result, we didn’t change it for the minor update and it still reads as 2018.2. All the changes are in there though. In case you missed it, the highlights of this release include Support for tables in Kindle for PC, support for HumanWare BrailleNote Touch and BI14 Braille displays, Improvements to both Onecore and Sapi5 speech synthesizers, improvements in Microsoft Outlook and much more. Be sure to read the What’s New for all the new and improved features and fixes!

The most recent release of NVDA isn’t the only exciting thing happening. We have a new release process! While this most directly affects developers and those using “Next” and “Master” builds, it is exciting for the whole project. The main goal of these changes is to remove the need for a “next” branch and pull request incubation. For those not familiar with pull requests, they are a feature of Github that allows people to contribute a collection of code changes to a project such as NVDA. The key reasons for this are:

See the Release Process wiki for the full process, including the new changes.

But wait, there’s more! We’ll even throw in a NEW WEBSITE! That’s right, the shiny new revamp of the NV Access website that we’ve been teasing and promising for months is now live. There are still some fixes and finishing touches to be done, but overall, it is a much more modern look. Not only will this enhance our branding and our visibility in the mainstream community, but it will better showcase the important work that we do. The new site is also more mobile friendly. If you haven’t been to https://www.nvaccess.org/ lately, check it out and let us know what you think! 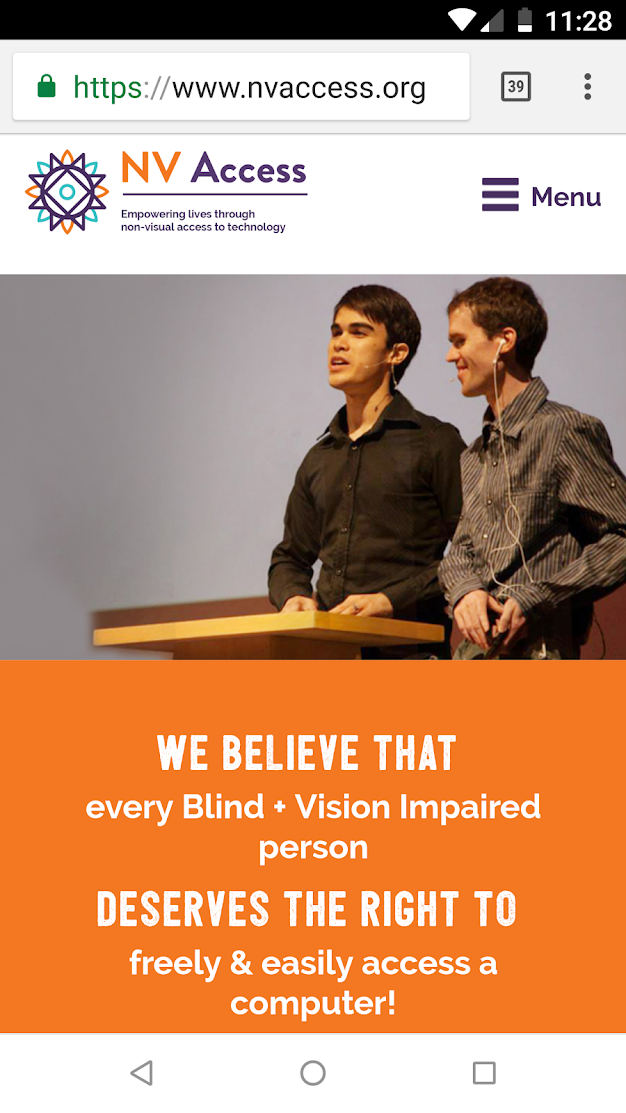 Earlier this year, NV Access launched a short video on the impact NVDA has had on users around the world. The positive feedback on the video has been incredible! More than that, it helps raise awareness of the life-changing impact NVDA has. The impact of access to computers for people with no prior access to technology.

If you haven’t yet seen the video, you can check it out on our YouTube channel.

We also have a longer, 12-minute version of the video. Our intention is to promote this to organisations and governments around the world. Illustrating the benefits of NVDA enables us to work with people on the ground, to get it to those who can benefit. Before we do that, we would like to have the video audio described, to ensure it is accessible to everyone. To do that, we’d like your help, please! The 12-minute video is on YouDescribe, a service which crowd-sources audio description. We are asking supporters with sight to donate some time to help describe the video. This will help us promote the incredible benefit that NVDA can provide to those who most need it.

To help, go to Youdescribe.org and investigate their information for describers, to get a feel for what is involved.

Then head to our video to help describe it!

Finally, for this edition, we’re sending Mick and Reef out in public again, this time to Austria. The 16th International Conference on Computers Helping People with Special Needs is July 11-13. Mick has been invited to deliver a keynote presentation on the amazing impact of NVDA. The invitation is a great honour, and NV Access is very appreciative and excited to have the opportunity to attend.

That’s all for this time. There are a lot of exciting things going on and we are really grateful to have you sharing our journey!