Welcome to In-Process for this last week in November. Although In-Process might have been quiet lately, rest assured we’ve all been busy as we work towards NVDA 2018.4.

Earlier this month, NV Access was honoured with an invitation to speak at a seminar for students. Organised by Persatuan Tunanetra Indonesia (Pertuni), the seminar was in Jakarta, Indonesia. Mick’s speech inspired the students and the questions asked were very insightful. The students were excited to meet the creator of the software which makes it possible for them to access a computer. After the seminar, we had the opportunity to explore the fascinating city of Jakarta. We are grateful to Yudi Utomo, the moderator of Mick’s session, and our translator Rina. We would also like to thank Aria Indrawati, the president of Pertuni, for her generous invitation. 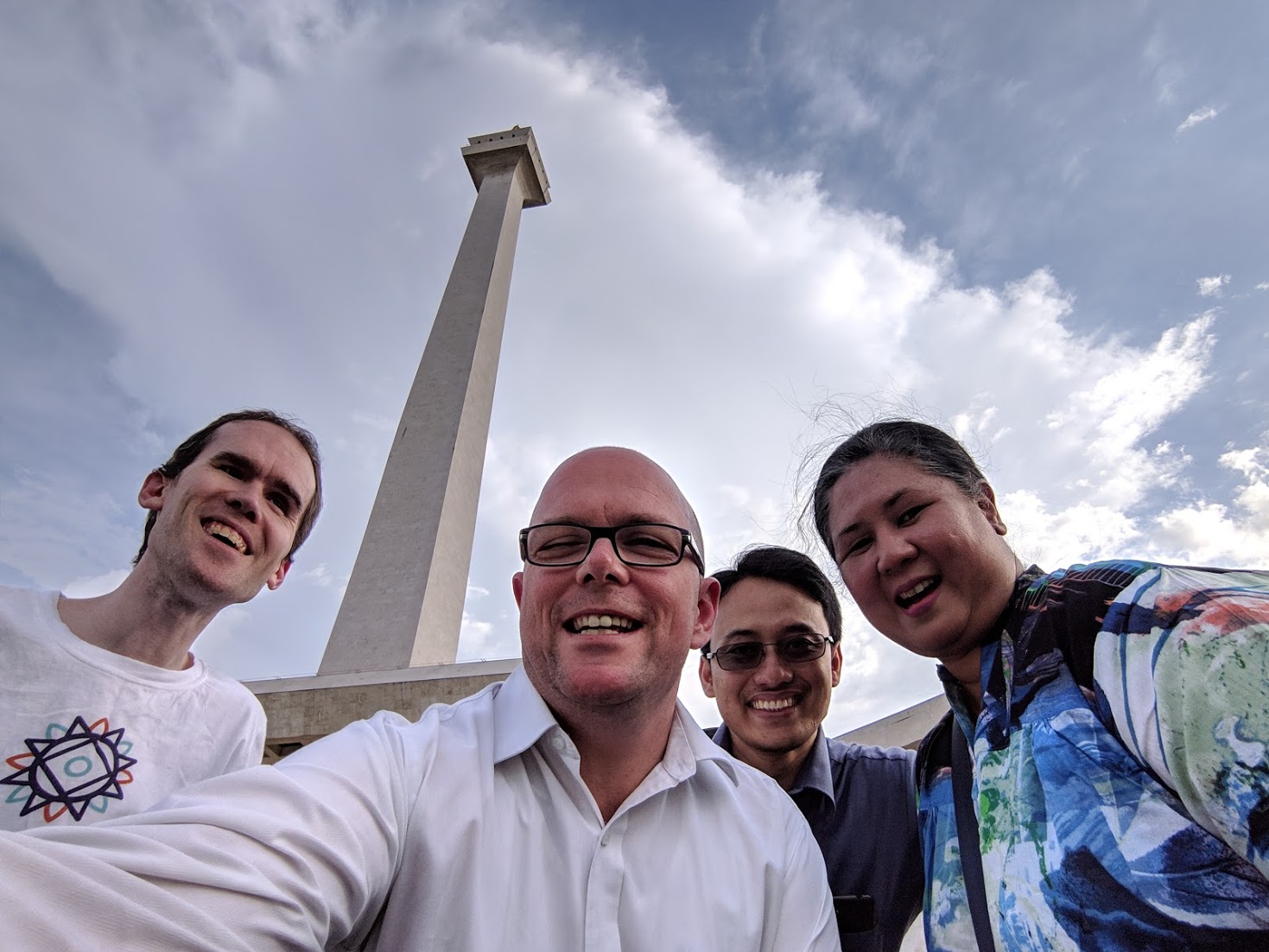 As this edition goes to print (goes to screen? Goes to web?) we are at NVDA 2018.4beta2. Since we changed our release process earlier this year, I thought a recap of what an NVDA beta release is would be helpful.

NVDA has three types of pre-release builds which anyone can test: “Alpha”, “Beta”, and “RC” (or “Release Candidate”).

For those interested in testing the latest “bleeding edge code”, we have our “alpha” releases. These come out a few times a week, sometimes several in a day and have the very latest code in them. While they may not always work as expected, they are one of the first ways of testing new features or bug fixes.

A month or so before a new version is due, the first “beta” release comes out. This release is more stable than alpha releases. Beta releases are a great way of testing fixes and features which are most likely to make it into the next version. Having people test these versions is also crucial to find bugs before they make their way into the final version.

A couple of weeks before the new version, the final phase of testing is the “release candidate” builds. We need as many people as possible testing these builds. If no problems are found here, the only difference between the RC and the final version is the name. The more people who test beta and RC builds, the less likely we will need to go to a minor release after the stable version.

If you’d like to try out the latest beta version, visit the NVDA 2018.4beta2 release announcement page.

If you’d like more detail about the full release process read the Release Process page.

How to test beta and rc builds

Running snapshot builds of NVDA is the same as running a stable build. For release candidates and beta releases, we put out an announcement with information about what is new and a link to download. Here is the release announcement for NVDA 2018.4 beta2. At any time, download current snapshot builds from the Snapshots page.

Once downloaded, run the executable file. After playing a sound to indicate it is starting, the license agreement opens. Read the agreement, then press TAB to the checkbox and press SPACEBAR to agree to it. There are four options:

“Install NVDA on this computer”. This option installs NVDA on the computer, replacing any existing installed version. Once installed, RC builds prompt to update to new RC builds and then the final stable build. Beta builds prompt to update to new beta builds, then to RC builds and the final stable build. To get back to beta testing for the next release you will need to manually download a new beta for that release.

“Create portable copy”. This option creates a portable copy of NVDA in a directory you choose. Portable versions have some limitations, but you can test most features. This avoids going through the license agreement each time or overwriting the installed version.

“Continue running”. This option closes the dialog and continues running the temporary copy of NVDA. This is useful for testing features of this build without installing it.

If you find any bugs, or have any other feedback, there are several ways to let us know. Feel free to create an issue on Github, post in the user Email group, or send us an email.

So, what is coming in NVDA 2018.4? From the What’s new: “Highlights of this release include performance improvements in recent Mozilla Firefox versions, announcement of emojis with all synthesizers, reporting of replied/forwarded status in Outlook, reporting the distance of the cursor to the edge of a Microsoft Word page, and many bug fixes.”

And for those who have used Beta1, here’s what’s changed in Beta 2:

Reverted #8869: Browse Mode: don’t refuse to report focus changes for replaced controls or focused ancestors. This was causing many other focused controls to be reported twice in Browse mode.

Note: Using this beta with Mozilla Firefox version 63 or earlier, on rare occasions certain changes to data in tables may not be correctly reflected in browse mode. In these cases, manually refresh NVDA’s virtual buffer with NVDA+f5. Mozilla Firefox 64 (hopefully released before the end of this month) fixes this bug.

Remember to grab the beta to try out from The NVDA 2018.4beta2 announcement page.

That’s all this time around. Next time, we will be almost ready to release NVDA 2018.4 stable and we look forward to joining you again then!