It’s 50 years since Neil Armstrong, Buzz Aldrin and Michael Collins took off on top of a Saturn V rocket, on the Apollo XI mission, headed for our little rocky companion in space. I don’t have an NVDA tie-in, I’m just a fan of humanity’s quest to explore. ? Here’s a photo of a medallion commemorating the moon landing. It features an image of the lunar lander with Neil Armstrong and Buzz Aldrin and the names of the three astronauts (including Collins who stayed on the orbiter). 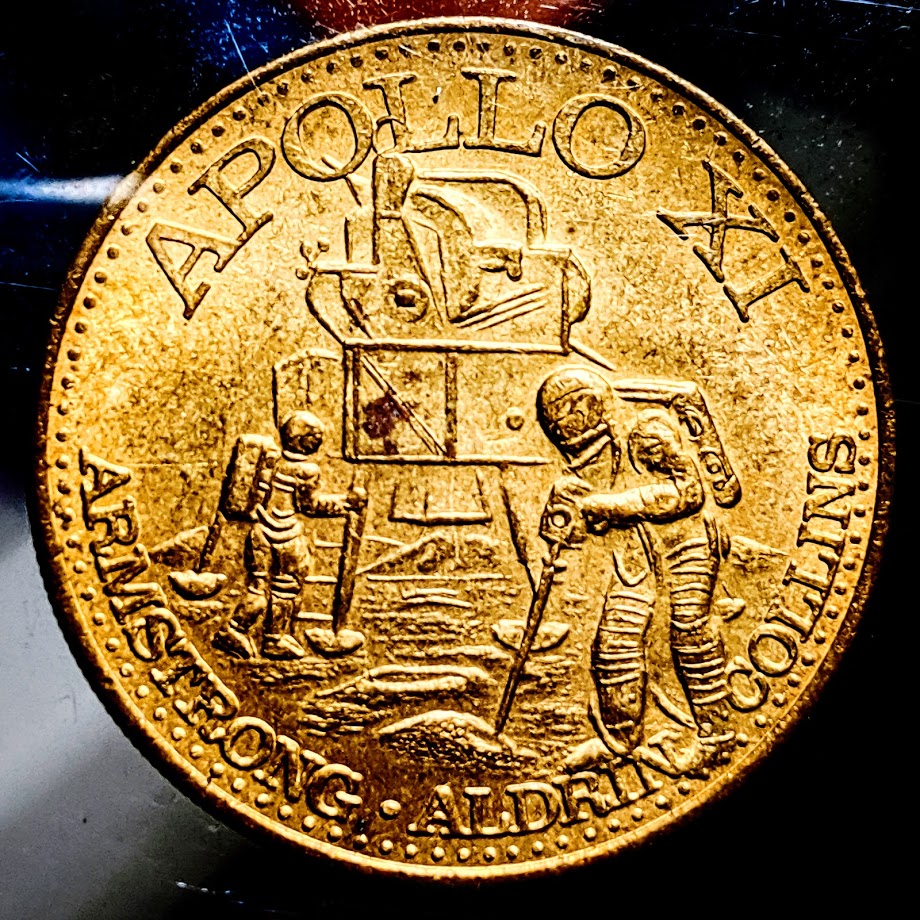 Preparations continue for NVDA 2019.2 with the release this week of NVDA 2019.2 Beta 3. This beta is a huge jump from the previous betas. There are new options, updates to eSpeak NG and LibLouis, and improvements in a range of programs from Windows console, Visual Studio, Firefox, and lots more.

Here is an excerpt, just from what is new from Beta 2 to Beta 3:

As always, if you want to read the full what’s new, please download NVDA 2019.2 Beta 3 and find the ‘What’s new” option in the Help menu.

A lot of people were very keen to see some of those updates in NVDA as soon as possible, so we felt it was worth pushing back the release date of NVDA 2019.2 in order to accommodate all those changes. The translation string freeze has commenced again. This means translators have until July 29 to update their translations for 2019.2. So, you can expect to see a release candidate around the time the next In-Process comes out, and the final version a week or so later.

Preparations for NVDACon are still underway. As noted previously, the conference has been pushed back to later in the year, but organisers are still keen for anyone interested to get your topic submissions in as soon as possible. Visit the NVDACon site for more details!

A question was asked on the NVDA Users Email list about spelling the current word. It’s a simple question to answer, but an important keystroke to know, so I thought I’d share it here. The exact keystroke depends on whether you have NVDA set to use the desktop keyboard layout, or the laptop keyboard layout. Desktop layout uses the number pad for a number of commands. Laptop layout remaps keystrokes so that nothing requires a number pad. Note that you can also set whether NVDA uses caps lock, or insert (and which insert) as the NVDA modifier key separately from the keyboard layout. You can even use both caps lock and insert as NVDA modifier keys if you wish. But I digress…

If you are madly searching through the User Guide, the command you want is “Report current word in review” in the “Reviewing Text” section of the User Guide. If using the desktop keyboard layout, press Numpad 5 (with num lock off). If using the laptop keyboard layout, press NVDA+control+. (NVDA+control+full stop or period). Press this command once to read the current word. Press it twice quickly to spell the word. Press it three times quickly to spell the current word using the phonetic alphabet. If the current word is “access” then spelling phonetically would read “Alpha, Charlie, Charlie, Echo, Sierra, Sierra”. Note that this command reports the word at the review cursor. In most cases (and particularly if you aren’t familiar with the review cursor), this will be the same as the word at the caret. There are quite a few NVDA commands which spell information when you press them twice. Some commands spell phonetically when pressed three times quickly, and others copy the text to the clipboard. Try reading the current line, the window title, or the status bar.

If you’d like to learn more about the review cursor, or different ways of reading information, then our “Basic Training with NVDA” training module has you covered.

That’s all for this time around. Do try out the new NVDA 2019.2 Beta 3! Be sure to Let Us Know how you find it! While you’re testing things, Let Us Knowone command you’ve never tried pressing twice quickly which you just learnt spells something.